A Cover reveal for the 2nd book of The Lucfer’s Clock Series.

Title: Arrival of the Beast 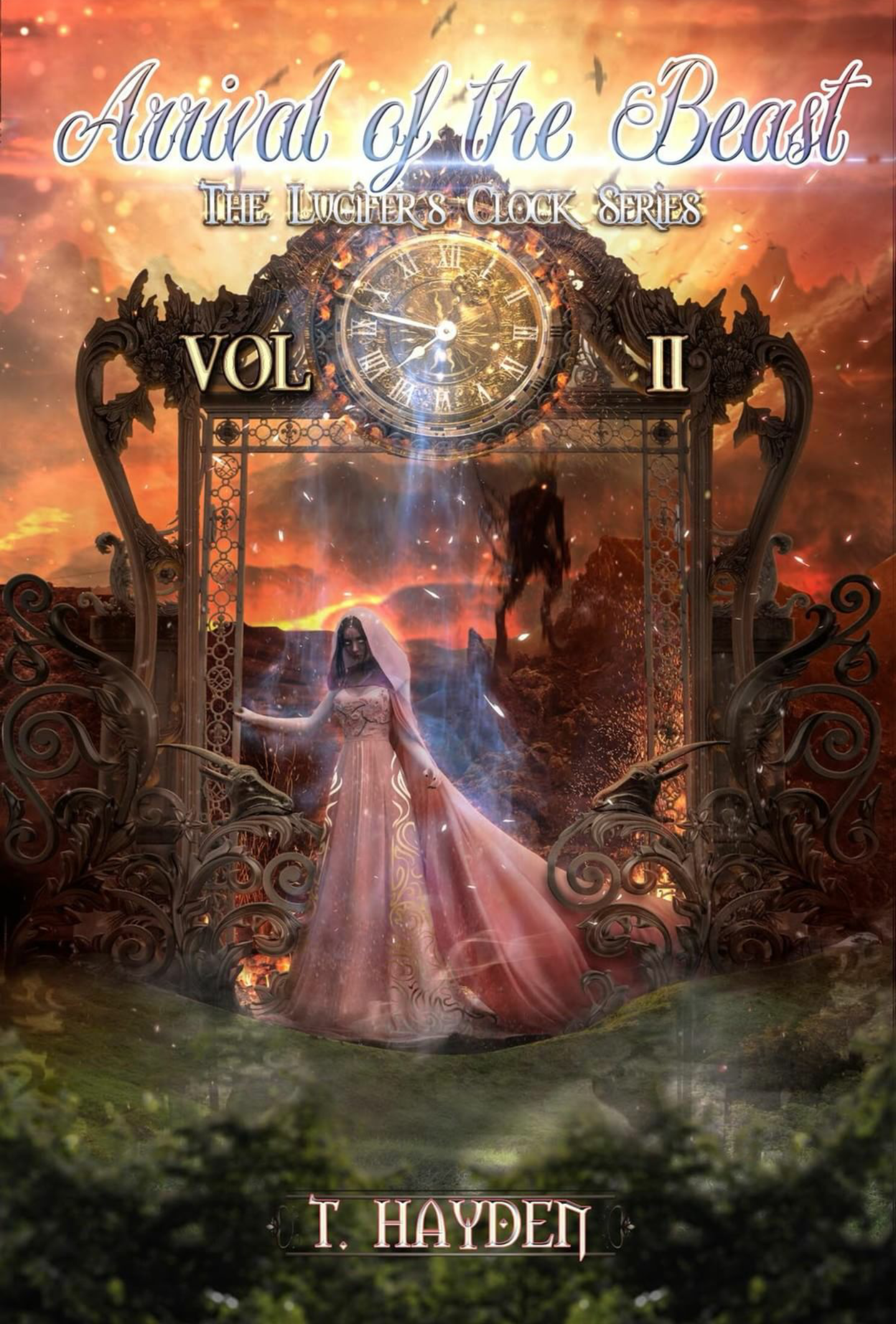 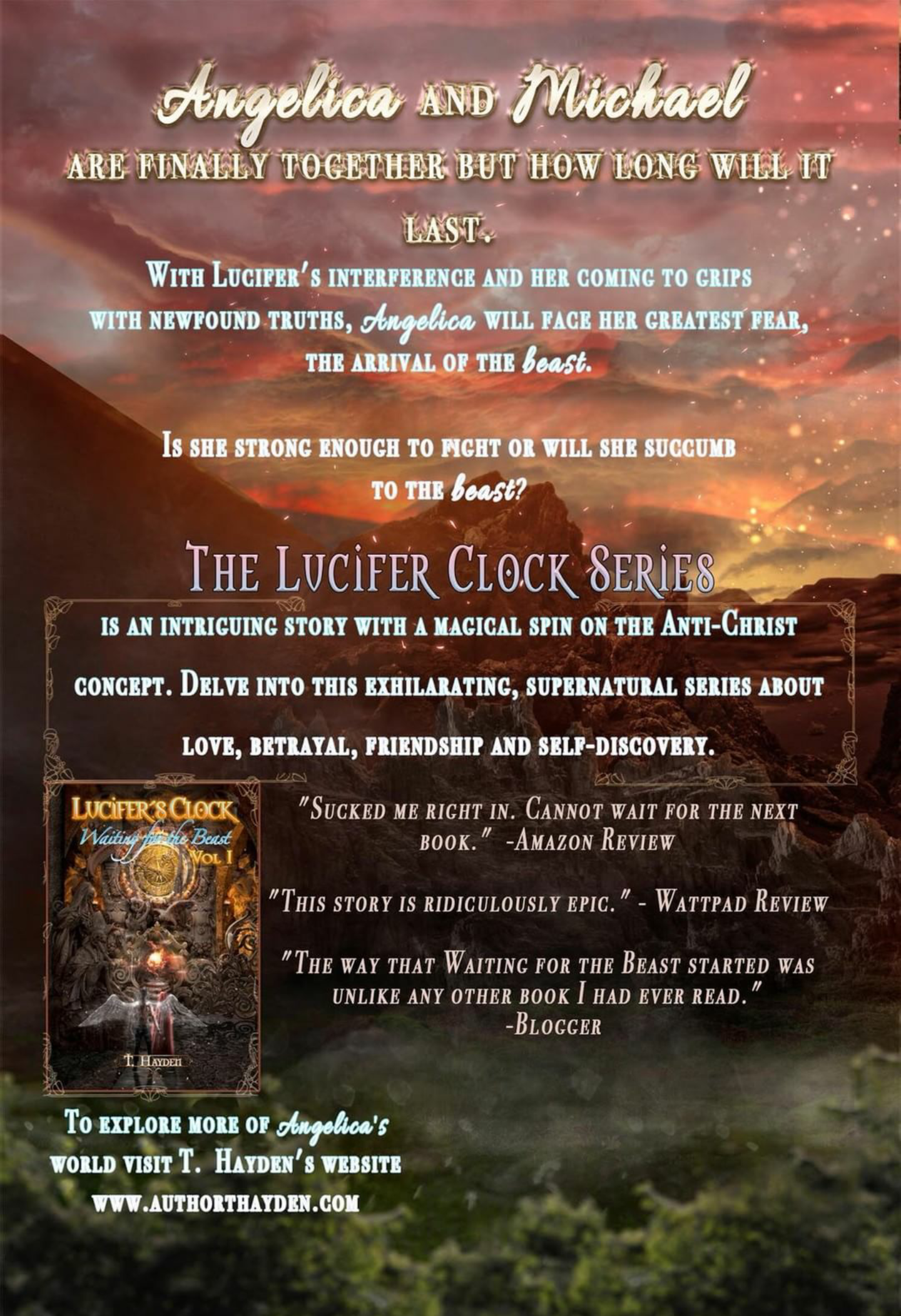 Just when Michael and Angelica think they can be together the supernatural world threatens to tear them apart and turn their perfect world upside down. Angelica is abruptly assigned a new guardian angel that she instantly dislikes. The relentless bounty hunter returns to collect his bounty, wreaking so much havoc that Angelica is torn away from school and her friends, eventually a prisoner in her home.

When she thinks things can’t get any worse, she discovers a heartbreaking secret that her family has been keeping from her. Fed up with how her life is progressing Angelica decides to take matters in her own hands. She is done waiting for the beast. It’s time for to welcome the beast’s arrival.

Angelica was doing at least 90 mph when, she saw a familiar charger flying towards her on the opposite side of the road. She hit the brakes praying it was Roman. The car passed her. It was him. They both flashed each other smiles of relief. She pulled her car over to the side of the road and watched in her mirror as he did a sharp U-turn and came back towards her.

When he was about ten feet away, an abnormal sized, furry creature with horns ran smack into the side of his car. The Charger went up in the air, flipped and landed on its side. It slid about twenty feet in the opposite direction of Angelica. Angelica let out a deafening scream. She jumped out of her car and ran as fast as she could towards the wrecked car. Glass and car parts littered the road. She prayed he was alive.

“Roman!” she screamed. Movement out of the corner of her eye made her slow her running down to a jog, then to a walk until she wasn’t moving at all. There were a group of creatures that she assumed were supernaturals walking out of the wooded areas on both sides of the road. The scariest part was that all of them had their undivided attention on her. Angelica looked at her car then at Roman’s car. She was halfway between both. She’d made up her mind to make a run for her car, when Roman’s car crashed back down on the ground. She and the creatures turned their attention towards the sound. Angelica didn’t expect to see Gabriel, Connie and Michael standing there, but there they were, in all their pissed of glory. She gulped at the sight of them.

Gabriel and Michael wore their armor, with their swords unsheathed. The sight of Michael’s fiery sword was a humbling sight. Connie’s hair was blowing around her, while her eyes were an intense, electric blue. Her skin seemed to glow and pulsate instead of the shimmer that Angelica was used to. She was even more surprised when Roman walked from around them, wiping himself off, as if the glass was nothing, but bread crumbs. If he was hurt, he didn’t show it. Angelica’s mouth dropped in awe. He did not look like the same Roman she had seen more than a week ago in her bedroom. This Roman was bigger, braver, and ready for war. He cracked his neck as he twirled a sword in his left hand.

“You made a mistake in coming here today,” said Connie, her voice amplified as if she was speaking over a PA system from the sky. Some of the creatures even looked up at the sky; while others knew it was Connie speaking to them.

“You can still leave with the breath that’s left in your pathetic bodies.”

Connie lifted one of her hands and pointed it at a creature that resembled a Minotaur. This is what had hit Roman’s car. Lightning shot out of her hands into the creature. It howled in pain. Connie didn’t stop until there was nothing, but charred remains of the creature. When she finished, she looked back at the others.

The creatures growled and snarled as they backed up slowly. No one wanted to be on the menu for well done. Angelica inched slowly towards the charger, while keeping an eye on the creatures. A handsome, pale young man stepped out from among the group of creatures. Angelica stopped moving when she saw him. He was dressed impeccably in a black suit and tie with shiny black dress shoes to match. He looked like he belonged at a black-tie party, and not in the middle of this freak show. He flashed Angelica a dazzling smile that showcased two long, sharp fangs. He was a vampire and a gorgeous one at that. He turned around to the group of misfits behind him.

“Are you going to let this witch give you orders?!” he yelled pointing towards Connie. “You already have a master and he can do far worse to you than what she can do. We are here to take back what they have stolen from our master! You wanted a fight and now you have it! NOW FIGHT!” He yelled.

The supernaturals responded in an uproar. The ground vibrated as the creatures stampeded towards Angelica. With a panicked look she looked over at Connie and the others, and they weren’t there. She blinked and all four of them were surrounding her in a wide circle.

“Whatever you do don’t break formation!” Michael commanded. 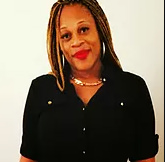 T.Hayden resides in Newport, Minnesota with her three kids and significant other. She loves her family, but she frequently fantasizes about eloping with a vampire or having a forbidden love affair with a Greek God. To curb her traitorous desires she writes paranormal romances.

You can also buy a copy of the first book of the Lucifer’s Clock series in AMAZON .